The last month I have been trying to balance real life and RSCD in the best way I could, however communication is not my strongest side, it has never been due to the workload I have to do. My goal is to try and improve my communication to the community, but also be more consistent with updates as I were in the beginning. As most of you know, Zack left RSCD due to differences on how the server should be ran. The people who is still in our staff (Goose, Asuna and Me) want to move forward with new unique features, a whole lot of events and rewards, easier access to items as well as reasonable changes that the custom players have been suggesting. We want players to have fun and not feel like they are being in a military force.

People have told us to give up, shutdown the server, join other server(s) and the answer to that is:
We won't close the server, we won't give up and as you can see regardless of our player count, the server will still remain online and still be worked on.

We would like to give a big thank you to the players who are still playing daily and for the support.

Recap/Changes made:
-Censoring has been more or less removed from both in-game and on discord.
-Logout timers for Ranged/Magic/Melee has been updated to 10 seconds.
-Teleports are now blocked behind the 10 second timer rule in wilderness.
-NPC Drops has been heavily boosted.
-Black demon farm in high level altar was added to the game. 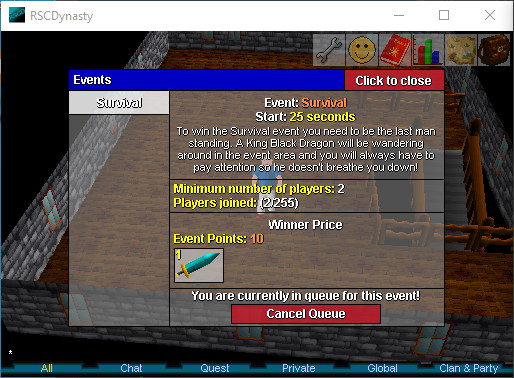 Thank you all, and we wish you and your family a safe holiday!
-RSCDynasty